Thank you for welcoming me to your group.  I came across you by accident, but thought that this might be interesting to the people in the discussion about Dryad Looms, which were made in Leicester, in England.

After a disrupted couple of years, I’m getting back to work!  I’m using up the stash while sorting and organising everything.  It’s funny how an inanimate piece of equipment can be the store of many memories!  We found this lovely old Dryad rug loom  in 2001 in the antiques centre in Todmorden.  We were told it had come from Bradford Technical College when there was a clear-out of old equipment.  It was in a sorry state.  Three of the springs and the beater bar were missing; it was dirty and the left-over cotton warp was tangled and filthy.  We did the deal and wrestled it home;  it’s made from Columbia Pine and weighs a ton! We stripped it down and repolished it and assessed its needs. At the time, we were renovating our house and were regulars at Merrit and Fryers in Skipton. It was obvious that we needed someone with savoir-faire to help out and one of their carpenters gave us advice on sourcing a length of pine - a firm in Guiseley. We bought a lovely chunk of pine beam and headed back to Skipton, taking the existing piece as a pattern.  David, the carpenter, made a beautiful piece to replace the missing beater bar - said he was thrilled to do something so different from kitchen cupboards and doors and only charged a tenner! Mark did the finishing and polishing and it’s a beautiful match to the original frame. Of course, we’d no idea of what the original actually looked like, nor how it should be fitted, so we made it up!  It works perfectly.  However, the springs for the beater-return were another matter.  None of the hardware or metalwork shops had a clue about them and we had come to the conclusion that we’d have to have them made specially when a helpful metalworker said they reminded him of gate-return springs and maybe the farm suppliers in Skipton could help.  It was the morning of 11th September 2001.  We arrived at the farmers’ suppliers just near to the canal. The door was open. The shop was silent and empty.  We waited a while and then the owner appeared through a side door with a dazed expression on his face.   “Sorry to keep you waiting,” he whispered, “but I’ve been watching this awful accident at the World Trade Centre.  it’s terrible!”  We left him standing there and rushed across to Sunwin House’s TV salesroom.  The place was filled with people sitting on the floor. The wall of TV screens endlessly repeated the scene of the plane crashing into the first tower.  We joined the silent, seated crowd and, as the horror unfolded, realised why we had been kept waiting in the farm shop.

We stayed there a very long time.

Whenever I use my Dryad, pulling the beater down to the next fell, I remember vividly that sunny morning in September when everything changed.

Some time later, at the Pudsey Book Fair, I found a 1950’s book, “Dryad Handicrafts Instruction Leaflets” which revealed that the breast-beam beater should have been very different from the hefty beam that we had concocted, but I wouldn’t change it for the world!  Over the years, I have woven many tapestry rugs and pictures and the loom has moved from room to room and country to country.  Hopefully it will give many more years of pleasure and joy in the craft of weaving, both to me and others in the future!

Sorry - I have photos, but can’t see where/how to post them!

Hi there. I have recently acquired this dryad loom and think it should have springs attached to the beater.  If you still have yours could you give me some guidance on the length of the springs and where you managed to find them (a quick search on Amazon only produced much smaller springs than would be needed).  I'd be very grateful for any guidance.  Also wondered whether bungees might work, or whether I could fit some sort of pulley system instead. 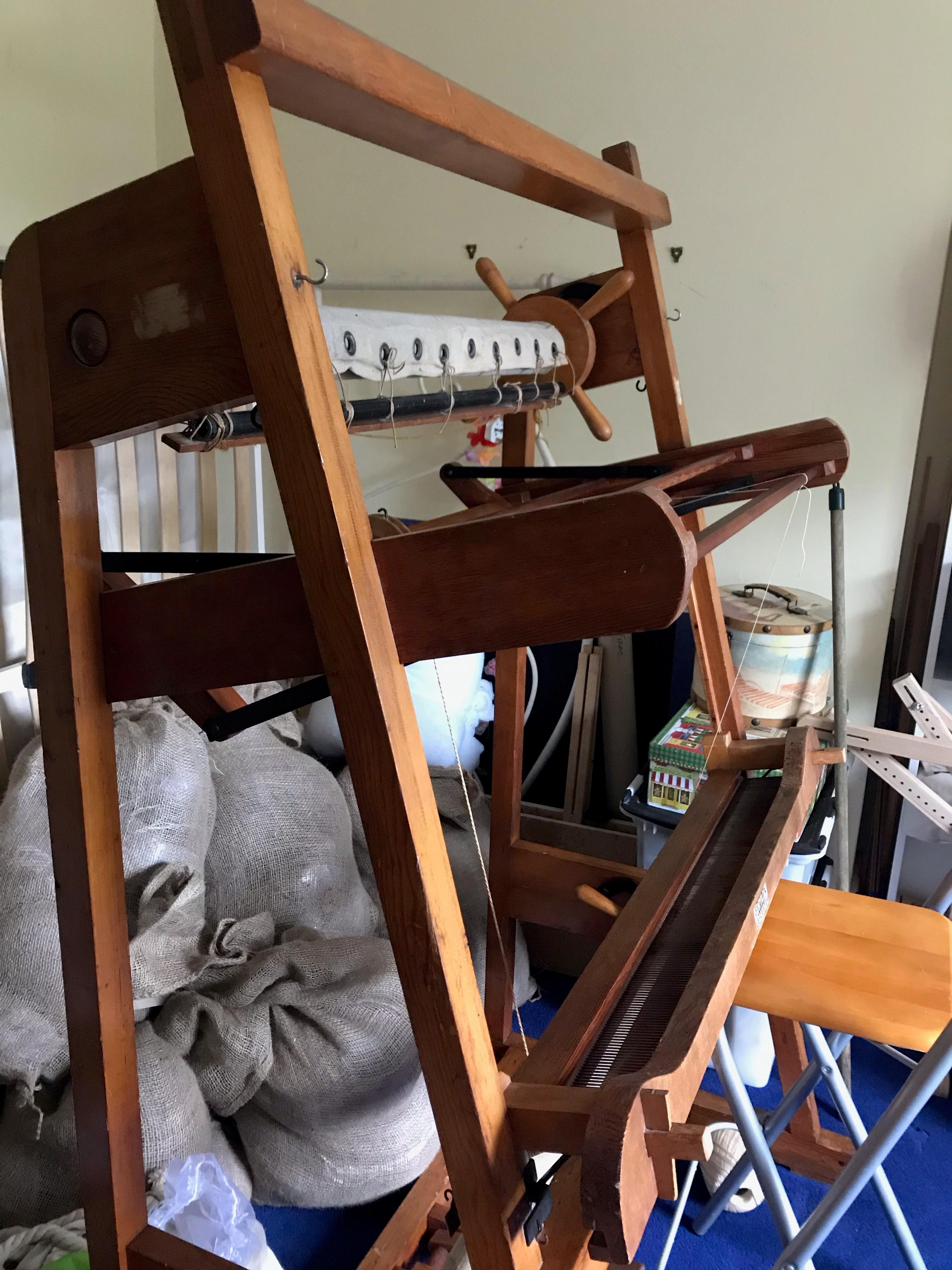 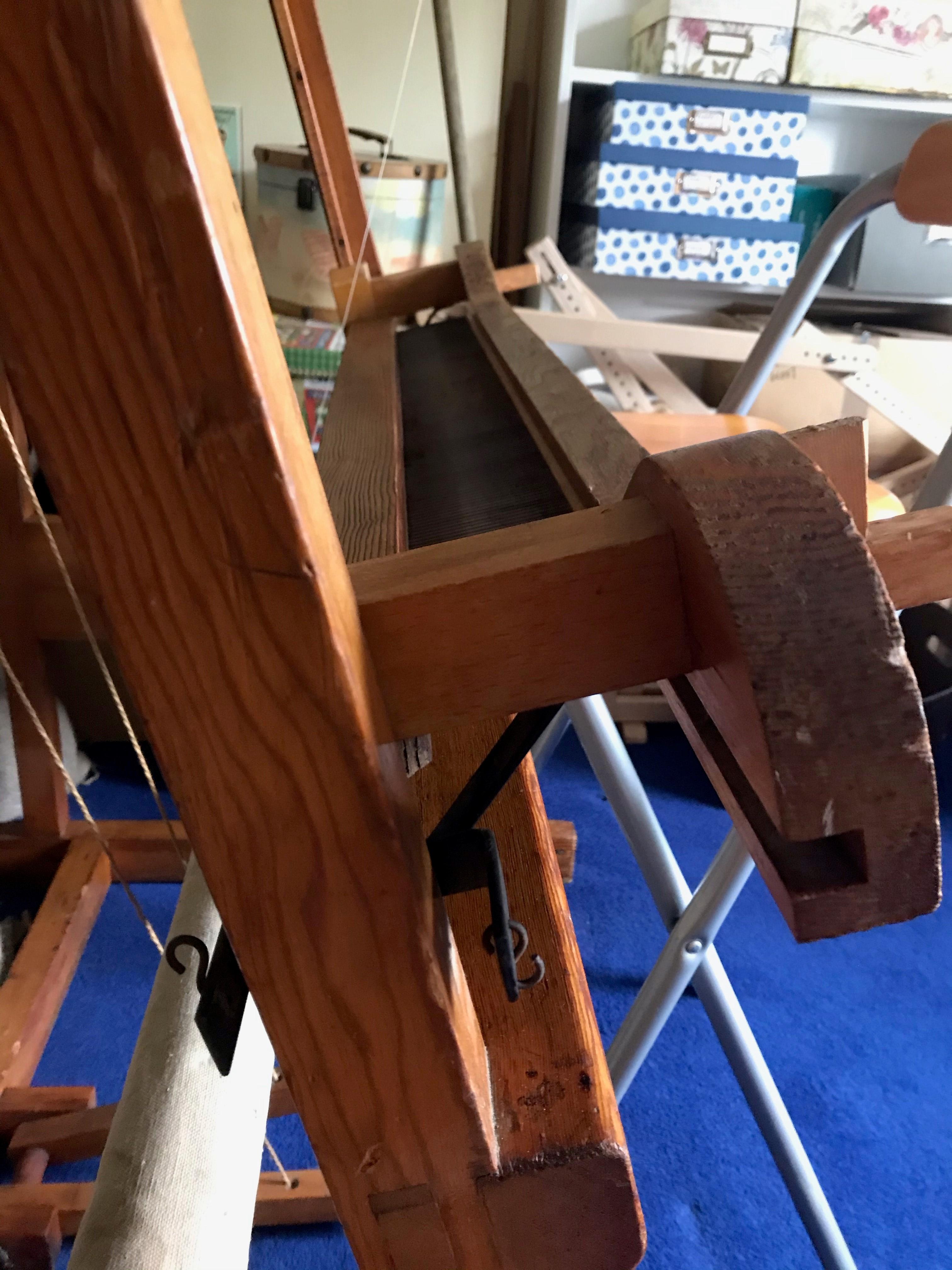 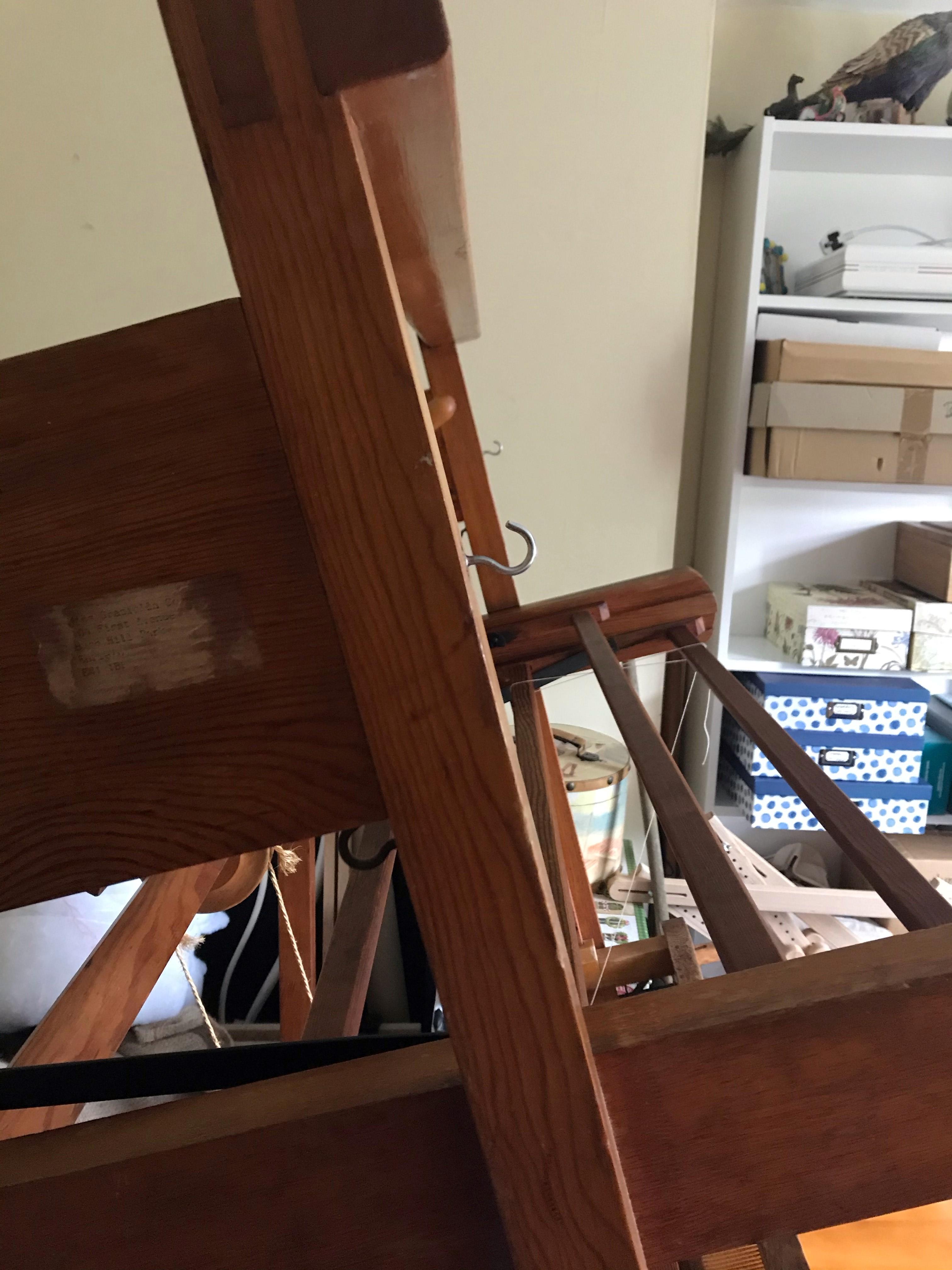 I have an upright Dryad Loom

I have an upright Dryad Loom that still has springs, yes they are quite big. I'm not completely sure if they only made one style of loom. Looking at your photos I think ours are quite similar. I can measure my springs tomorrow and will post the measurements for you. :)

Hoping you can tell me how to dress this loom as I haven't got a clue just purchased one of these but it's in poor condition so I'm refurbishing it,

I'd be happy to help you get this loom warped. How familiar are you with the weaving process? Do you normally warp front to back or back to front?

My springs are about 3/4 " in diameter (across) and 16" long. I would measure between the two places your springs attach for the length. I don't know how standardized these looms were, so it is possible you will need a differect length. I hope that helps. I look forward to seeing what you all weave on your looms I'll keep checking back here for more questions!

Did you get your loom warped?

Did you get your loom warped?

Hi, and especially to WeaverMo (I can figure out how to communicate directly, sorry?),

I don't know if anyone can see my personal profile, which I've used to try to describe my quest.  So, briefly, I'm trying to renovate a rather elderly upright Dryad rug/tapestry loom which is missing the same sort of components that WeaverMo describes, including springs, and I wondered if it might be possible to see an image of the components (beater/reeed/?shed) that book described in the posting.  I can work on the springs, thanks to other contributors, I think, but I'm flummoxed by what the beater actually looks like.  I'll try to add some images too here . . . many thanks. 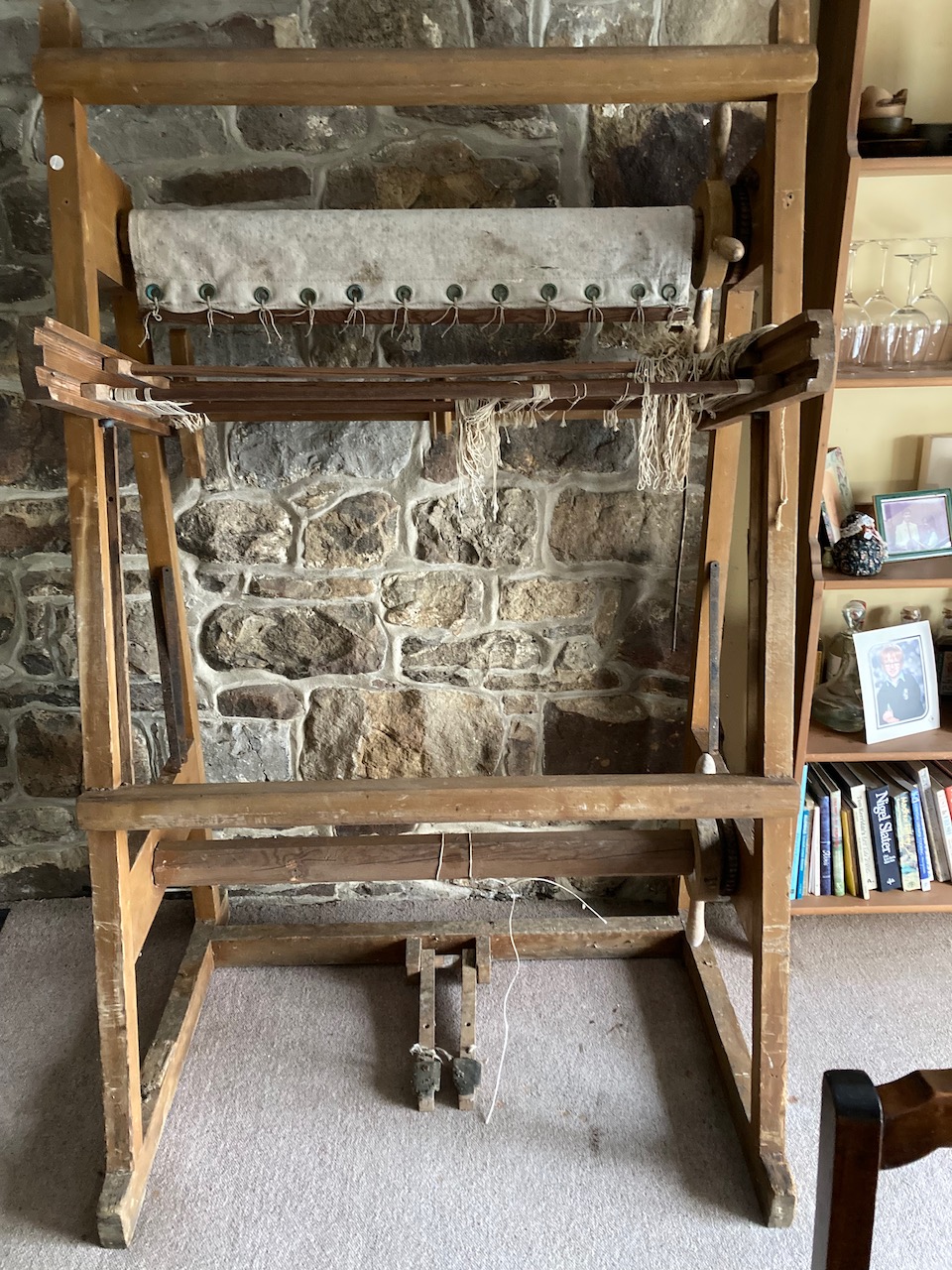 Although not the same set of leaflets as WeaverMo mentions, I have sourced a possible help through an AbeBooks bookseller in Bath, and also, incidentally, I've purchased a pair of stainless steel springs, 10cm x 40cm (roughly equivalent to 3/4" x 16") through  eBay which I hope might work.  The main thing I need to identify is that missing beater and also a source of the reeds, which I think should be available somewhere.  Progress anyway!