I design a bookmark every year for the confirmands at my Episcopal church in Selma, Al, 'Historic" St. Paul's (If you forget the 'historic" part you get excommunicated! (-; )

I did some of these as dukagang and some as taquete.  I will ul the dukagang .wif later.

keeps coming out upside down in the picture-draft, but, if you are using Weavemaker, it reverses again when you dl the .wif.   OF course, being a bookmark, it doesn't matter which direction it's weaving!   There is a photo of it under "my stuff."

This started life as a "peg" or "lift" plan but I had to put it into treadling to get it to upload.  This explains the outrageous number of treadles!  It really works almost exclusively on a dobby, which lifts the treadles for you via your one or two treadles, or on a lever-operated table loom.  I guess you could use a direct-tie up floor loom, but you would have to lift up to six treadles at a time.   Some fancy footwork would have to go on.

I would suggest putting it back into "peg-plan" mode if you are using a table loom for this.   For those without PCW, if you open a .wif in Word, you will get the peg-plan "spelled out" and it's a bit easier to read if you are doing levers!  I initially sampled this on my Northwest Looms "Frieda" then wove the whole set of them on my AVL WDL. 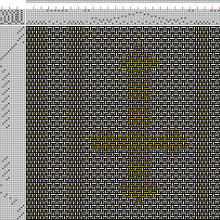 Number of Shafts
8
Number of Treadles
24
This Draft is from
mydesign
WIF File
2009bkmrkatreadle_0.wif