I have this loom - it's a Walker Mfg. Co., loom from Philadelphia, PA.  I haven't been able to find anything at all about this company online except for one listing for a counterbalance loom for sale back in 2015 on fiberarts.

I am pretty sure it is a horziontal countermarch loom.  It's got some damage to the back beam on the side where the brake would be.  From everything I've looked at on the loom I can't even tell what kind of back brake system it had originally.

Does anyone have any information at all about this loom?  We are refurbishing it now and I'd like to get an idea of the brake assembly.

Thanks for any help! 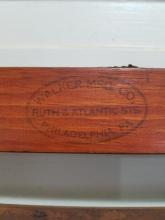 look at the E Worst book

Take a look at the book, Foot Power loom weaving.  Someone may have used the instructions in this book to build your loom.

Thank you for that.  I will

Thank you for that.  I will see what I can find.

Well, I have always thought

Well, I have always thought that there's a lot of really good collective information on here.  Today Joanne proved that.  I found that books at an archive site and sure enough, there was my loom.  It's no wonder I couldn't figure out the brake system.  All the looms I've ever seen have ropes and rachets and pawls or something.  This uses a simple peg hole and dowel rod system.  I hope it's as simple to use as it is to visualize.

So thank you very much, Joanne, for all your help.

Are all the parts to the loom present in the picture?  A CM loom would have two sets of lamms; horizontal pieces of wood parallel to the floor between the treadles and heddle bars.  I think I see four treadles in the picture, which with no lamms, would give you a four shaft jack loom with a direct tie up (one treadle to one shaft).

Old looms had many ways to tension the beams without the use of metal parts.  Holes drilled at intervals in the beam that a stick goes into was one.  Commonly there is a narrow board with holes in it hanging from the gallows halfway to the back of the loom, and the stick runs between this board and the beam.  I have also seen pegs in the beam, with a stick hinged on the far side of the loom and falling between the pegs.

That was a good call, Joanne.  I have heard of Worst's book, but have never seen it, and didn't know it was available online.  He has some very interesting double weave patterns.  I see lots  of pictures of counterbalance looms, and one countermarche drawing.  The full instructions and dimensions are given for a 4 shaft CB loom with lamms (he calls them lambs), horses and a roller.  It looks to be a very functional and easy loom.  Congratulations, and have fun with it!

bwsd, so far all we have

bwsd, so far all we have found missing are just a couple pegs that hold the frame together.  We can make those.  It seems like there's one other small thing missing but I can't remember off hand.  All of the main pieces are there though.

That's not a very good picture, we had just stuck it together to make sure the main pieces were there.  This loom has 6 treadles and 4 harnesses.  At the top of the loom, hiding behind the front upper piece of framing, sit the upper lamms, there are 4 on each side, and in the middle, attached to the right side middle and bottom frame rail pieces, are the lower lamms.  There are also 8 of these.

It does have holes drilled into the right side of the warp beam where you would put a dowel/stick and on the right side of the frame are 5 pegs where the dowel/stick would rest as you adjusted the tension.  We are having to replace that large end piece that the holes are drilled in, where the winding handle will go, because it was sitting on a basement floor for 30 years and has rotted away.  We're in the process of trying to locate a suitable piece of hard maple for that but having trouble finding one because we are in NC and from what I've read/heard we grow soft maple down here. I've asked around for a piece of seasoned firewood that hasn't been split yet that would measure about 10-12" in diameter and 5-7" thick but so far no luck.  We're heading to a lumber yard tomorrow and I'm going to ask them about another suitable replacement wood. The beam is made out of one solid piece of maple but I don't think we can find a log large enough, or a woodworker willing to turn one that large.

I've wanted a cm loom for a long time but really didn't think I could afford one.  I've never woven on one, or seen one in action except on youtube, so it's definately a learning experience.

Contact Janet Meany, at the Weavers Friend website. She has collected manuals from many loom manufacturers over the years. Florence Feldman Wood, the Spinning Wheel Sleuth, is also a expert on vintage looms and their makers.

Thanks for that info.  I will

Thanks for that info.  I will see if I can get in touch with those folks.  It appears the Weavers Friend website hasn't been updated in years.  Maybe her email is still active.  The other is still active.

I would look very carefully at the pictures of the Swedish loom in Worst's book.  Your loom does seem to be make on this pattern, as Joanne suggested.  The purpose of the upper lamms is to pull the shafts down, and you may want to think how they will do that at the top of the loom.  Just because that's the way these parts were assembled, doesn't mean that how the builder made them.  People put things together in all sorts of odd ways.  All of the lamms are between the treadles and shafts, or they can't function as lamms.  If you have sticks above the shafts that are acting on the shafts, they are jacks.  The Glimakra website has lots of information on different types of looms and what the parts are called.

OK, so until I get some cords

OK, so until I get some cords run from the top "sticks" to the harnesses, then to the bottom lamms, I assume I don't know what type loom I have.  It does appear to be made on the pattern of the Swedish loom in that book.  The things at the top I thought were lamms are made to fit on top, there are pegs and cutouts. So now we just need to figure out which way the teadles and cords all work together.

We put the frame together today, we appear to be missing 6 pegs, and will put the other parts together this evening. The frame has been refinished, the other pieces I'll take back off one section at a time and clean up until it's all done.  I'm going to take some pictures in a bit of the top pieces.  Maybe that will help.

If you run cords from a lamm to the inside of a jack, and a cord from the outside of the jack to the shaft, stepping on the treadle will raise the shaft.  If you run a cord from the lamm to the shaft and to the jack, nothing happens.  However, if you have 8 lamms, you may have upper and lower lamms, which with the jacks, would give you a CM loom.  Look at the Glimakra website to see how the cords go.  You probably have some lamms that are larger or heavier than others, and a second pivot point for the second set of lamms.