Hi,  I am just got a used baby mac.  20" 8 harness.  I've been living without a loom for about a year now since I sold my 40" Gilmore.   My skills are a bit rusty.  This little loom has a sectional beam and  I've never used one before.  I dont usually weave particularly long warps.  Any ideas how I can get syarted wiyh this?

What other tools do you have?

Do you have a spool rack and tension box?  An AVL warping wheel?  A warping reel or board?  A clean, stout fence?  Once we have these answers we can better help you to sectionally warp.  They are in most normal to least normal order, but they can all get the job done.

Also, you may need to know the circumference of the sectional beam if warping from the spool rack.

Once we have these answers, we can drill down to your solution.

Unfortunately I sent my spool rack and warping mill with the Gilmore.  I had never used them so I assumed that I would not need them.  I only jave a warping board now.

I assume you're familiar with back-to-front warping in which you beam the warp before threading the heddles and reed.  You thread from the front, but beam from the back.

You need to create chains or warp for each section and beam them individually.  I do this for short warps, but I use a tension box as part of the beaming.  If you don't have that, I would rig up the equivalent of a section-wide (2" ?) warping valet and lease sticks.  Use the lease sticks as you would on a wide warp, on either side of the cross,  to keep the threads spread and in the order in which they were wound, and the valet to keep the tension on all the sections the same.  Tape across the spot where you are going to cut the warp, and pin the finished section with tape in place before goint to the next one.

If your taping and pinning job is neat and precise, you don't need to preserve the cross.  Otherwise, before you cut, put a loop of string around the center of each cross and slip full-length lease sticks back into the entire warp to assure that you thread in some semblance of order.  One or two crossed threads behind the heddles won't hurt you as they're all coming from a bundle anyway, but more than that can cause major problems.  You especially don't want threads to cross sections.  That's why I go for the tape method, and thread one section at a time, removing the tape only for the section I'm currently threading.

on the other hand...

You could always skip the sectional warping and warp like you usually do, just don't use paper or sticks and make sure your warp is going on with plenty of tension.

Many ways to warp with a sectional beam

I only have sectional beams and have devised a number of ways to wind on a warp.  If you can fix a reed to the back of your loom (? chairs & clamps ?) you can wind your warp (full warp, several sections, or 1 section at a time) while holding the warp tight (by hand or weighted) while winding on.  I also could survive with only my AVL warping wheel (it has a comb).  As you have indicated spool racks are less convenient for people with shorter warps.

I agree about the AVL warping wheel

I agree about the AVL warping wheel for any length warp.  Even used they are not cheap or what justmekaybee has on hand, though.  That's why I asked what tools she had before replying.

Several people have said "wind a section at a time".  I don't understand.   How do I keep that section tightly secured to the beam while winding the next section?    Also, no paper or sticks between warps?

I am familiar with back to front warping but have never done it that way.  Any tips will help.

Secure each section with tape

I secure each section by wrapping tape across the section and then stick a pin through the tape into the thread.  The instructions on the AVL website are helpful - http://www.avlusa.com/resources/library/ (weaving manuals).

thanks for all your help

Thank you to everyone. It is wonderful to get so much good advise so quickly.   Your posts are very helpful.  I'll let you know how it goes.

You can hold the cross if you

You can hold the cross if you like with a string. I also just tape each section. I don't have your loom, but I do have spool rack and tension box. But if your careful you can do it. In fact what does it really matter how much circumference you have on the beam. Do the length of warp on the mill or board and you know what you have anyway for warp length. I think someone already meantioned using a read by the back beam, like you would a tension box comb. I would use card stock paper in the sections if your going more than 10 revolutions and add one layer (one each sectional) every 5 yards there after. It worked for me recently with a 32 yard warp of 16/2 linen. 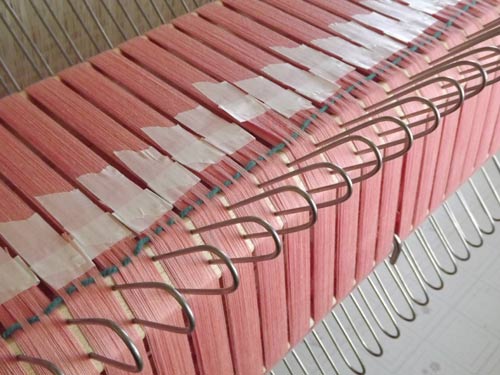 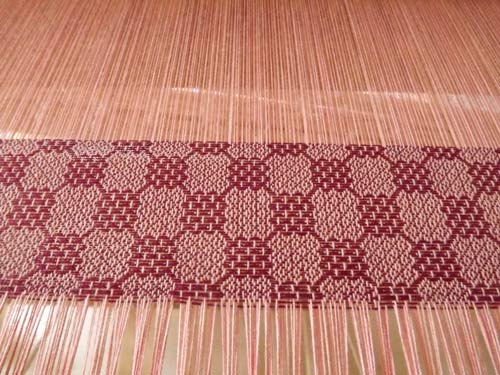 This was a short cotton warp for a table cloth.

Congratulations on getting a baby Mac.  I'm a sectional warper too but, in my experience, you can warp a baby mac conventionally using the sectional beam as long as you're careful not to snag a pin while winding on.  Even better, for $44, Macomber will sell you a new plain beam (see http://www.macomberloom.com/__Baby_Macs.html).  Then you'll have more warping choices.  Throw in another $22 for the double back beam (warp separator) and you can load two warps for fancy stripes and you can doubleweave.  With both sectional and plain beams and a warp separator you'll have a lot more warping choices.

Regular warping on a sectional warp beam is a piece of cake--simply wind your warp on the normal way. You need to pay attention to what the warp is doing as it passes the warp beam pegs so it doesn't catch on the pegs but, other than that, it's simply a matter of turning the crank (no packing materials required).

As others have noted, if you want to spend a little money on your new "baby," a plain warp beam is a good investment. If you are considering going with sectional warping on a second or larger loom, think about buying an AVL warping wheel--it's worth its weight in gold.

Regular warping on a sectional warp beam is a piece of cake--simply wind your warp on the normal way. You need to pay attention to what the warp is doing as it passes the warp beam pegs so it doesn't catch on the pegs but, other than that, it's simply a matter of turning the crank (no packing materials required).

As others have noted, if you want to spend a little money on your new "baby," a plain warp beam is a good investment. If you are considering going with sectional warping on a second or larger loom, think about buying an AVL warping wheel--it's worth its weight in gold.

out of a sectional beam. If you are not planning on using the sectional beam you can pull out the pins, they are not screwed in. Use a pair of vise grip pliers (put a piece of rag on the pins) twist and pull them out.

I'm not familiar with the

I'm not familiar with the loom or it's rollers, but some looms have detachable sectional beams, held by screws. Remove them and you have a regular warp roller.

I'm considering purchasing an older b4. Can you pull the pins out of the sectional beams on the large Macs too or just the baby? This one comes with 2 sectional beams. Would love to turn one into a plain beam.

Yes, use a vise grip pliers with something wraped around the pin to protect it. Pull and twist and the pins will come right out. Turn the top one into your plain beam,