This message was posted with pictures. If you cannot see the pictures, please visit the blog
http://francosfiberadventure.blogspot.com/2013/03/swsg-sat-9mar13.html 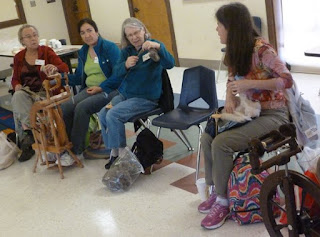 On Saturday March 9, 2013 was the meeting of the Sacramento Weavers & Spinners Saturday group at Arcade Library. Our topic was Spinning. So we had a Show and Tell session where everyone told about their current spinning projects and challenges. Above is Cathy, Sue, Stephanie and Cindy. 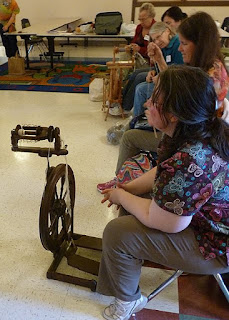 Sara bought a Kromski and we helped her fine tune it. It's her first wheel. Yay!

Sara found a Kromski Sonata wheel for sale at a good price. She needed some help fine tuning the setup and between the lot of us we were able to contribute some help. Her wheel was working better than when she came in. 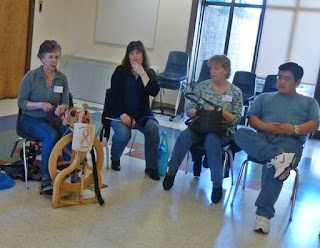 Wheels and drop spindles are demonstrated.

Wheels and spindles are demonstrated. 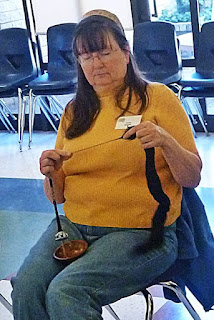 Vonnie demonstrates a support spindle she
made with a cabinet door knob and dowel. 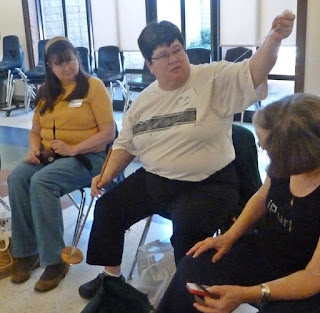 Linda shows off a Navajo spindle she bought.

Vonnie demonstrated a pretty little support spindle she made from a cabinet door knob and a dowel. She said it had a hole in the middle so the rest was easy. Linda S is showing a Navajo spindle she bought, which is another kind of support spindle. 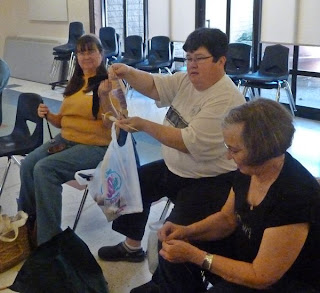 Linda S showed us a number of support spindles in different shapes and styles. 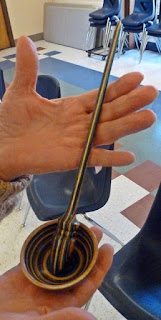 A beautiful support spindle and bowl a member brought so we could show her how to start it.

One of our newest returning  members showed off a beautiful spindle and bowl turned from laminated wood. She brought it so we could show her how to start it. With her, Linda S and Vonnie sitting together they made their own "support" group.

Before the library opens, CJ shows off a spindle made from pencil, screw eye and deli container top.

While we waited for the library to open CJ showed me her homemade spindle made from a pencil, screw eye and deli container top. Very clever. 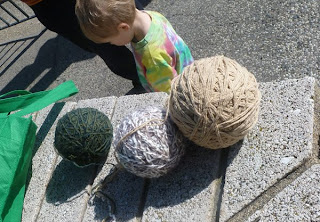 CJ bought some sweaters at the thrift store and frogged (unraveled) them for the yarn to use in other projects. CJ wanted some suggestions for plying the yarn. 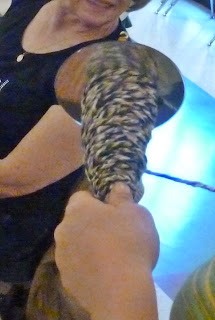 Recycled yarn is 3 plied for a new project.

Inside the meeting she borrowed a CD spindle from Linda Y and used it to ply the yarns into a new yarn for a project. CJ liked the look of the plied line. 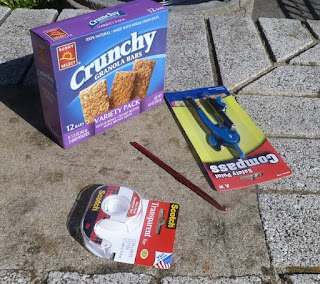 For my own DIY demonstration, before the meeting I bought some supplies to make a drop spindle. I used a crochet hook previously bought at thrift for 10 cents. Other items bought at grocery store. 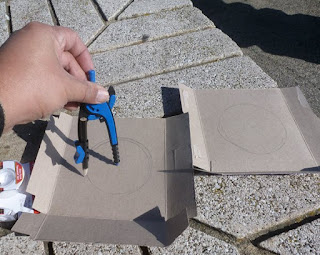 Cut open the box and use compass to draw circles.

I cut open the box with my pocket knife. Granola bars are saved for a snack later. I drew circles with the compass. I could use a soup can for circles but it is easier to mark the center spot with a compass. That's important for the last step. 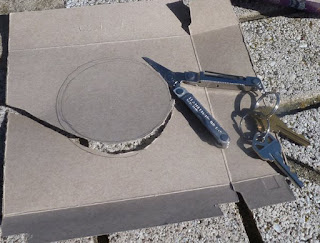 Cut the circles out with scissors.

Cut out the circles with a pair of scissors. 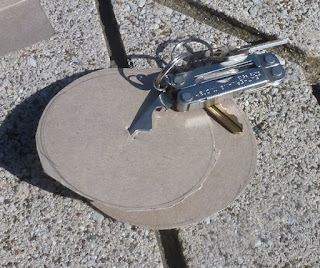 Poke holes in the center of the circles so you can push the crochet hook into it.

Push crochet hook into center and secure with tape.

The crochet hook is secured with tape. The two discs are taped together at the edges. The spindle spins well by itself until you start putting fiber on it. It stops fast. Too fast. It needs more weight on the outer edges, maybe by taping some coins to the outer edge of the discs? The other thing was that the hook slips off the fiber too easily. I couldn't get a smooth yarn going until I put a half hitch in the yarn.

The little tool on my key ring is a Leatherman Micra, very handy pocket tool.
http://www.leatherman.com/product/Micra

You can find our schedule at the Guild website
http://www.sacweavespin.org/saturday

It was a good day!