So I'm getting a Glimakra Julia.  It comes standard with a metal warping "beam" - basically a piece of pipe.

However they make a custom wooden cover for it.  After talking to the guy at Glimakra USA, I'm sure that this wooden cover is NOT suitable for attaching sectional beam pieces as it is made from slats of wood only 3/16" thick.

You could also use a router and made a octogon beam with a bird beak bit. Close the ends off. Not knowing how the beam attaches here, you may need to bore holes at the ends to glue in 2" dowel for the shafts. Then make your sectional rakes.

Or you could make a more open design that I see on older looms, where the beam is not solid, but more squirrel cage style woth a 2" dowel/shaft running to full width of the beam. Make the beam comparable to the one on the loom now, as you may be confined for space for the rakes to clear the back beam.

I gave my router away, LOL!  Actually I gave all my power tools away.  Well, I do still have a drill.

I'm trying to keep this as simple as possible - I don't care how it looks as long as it works.  This is short enough (around 67cm to 70cm) and simple enough (eg not too many cuts) that I ought to be able to handle cutting to length with a hand saw and sanding with a hand block - especially since this is only designed as a framework to support the sectional beam pieces.  The warp should never touch the beam itself.

Here is the Julia:

The back beam has holes drilled in it for attaching the wooden beam cover Glimakra USA makes for US weavers (Glimakra Sweden doesn't make them in the EU).

I had hoped to just mount my warping "box" on the existing beam using the existing pipe and those pre-drilled holes.

Can you point me at some pictures of the "squirrel cage" type of thing you are talking about?  I'm not sure what that would look like, to tell if I can adapt some ideas from that to what I'm trying to do.

Incidentally, this has to do with compensating for some of my functional deficits - I have reduced sensation in my hands which makes me fumble and drop things a lot (hence no more power tools, and no more silver working with torches and molten metal). These days, Me + Kitchen Knife = Adventures in Bleeding, LOL!

I cannot, for example, tell if I have hold of a warp thread unless I can see it between my fingers.  At least not with thinner yarns.  So - its not that I think I'm going to put 11 yards of warp on my tiny little Julia.  It's about getting a normal warp on there without tangling, and evenly tensioned, and if I run out of steam mid-warp, I can walk away with it partially warped without worry.

I'm putting a Fireside Rotary Temple on this in the hopes that it will make the typical wooden temples unneccessary - less fumbling about for me if it works as advertised.  Then if I can manage a sectional beam on the back, I should be good to go until the day I have the space for a larger loom - and then a lot of this stuff (AVL warping wheel, the rotary temple) can be used for that loom as well.  I'd still keep this loom for smaller projects.

Here is a picture that (I think) shows the holes drilled in the pipe beams:

It's a little dark but I think I can see the first 2 holes on the near end of those pipes.  Can't really tell the diameter of the pipes of course.

The sectional pieces are fastened to a disc at each end and in the middle.

Is that on a Julia?  And did you make that?

No, it is not on a Julia, it is a standard AVL sectional warp beam with one yard circumference. This one happens to be 60" wide.

I just thought it fit the description of a "squirrel cage" beam.

Sorry, I realized that after I went and found some pictures elsewhere.  Sorry for the dumb question.

I did see several examples of different ways to do this such as this that is close-ish to what I was thinking of originally: 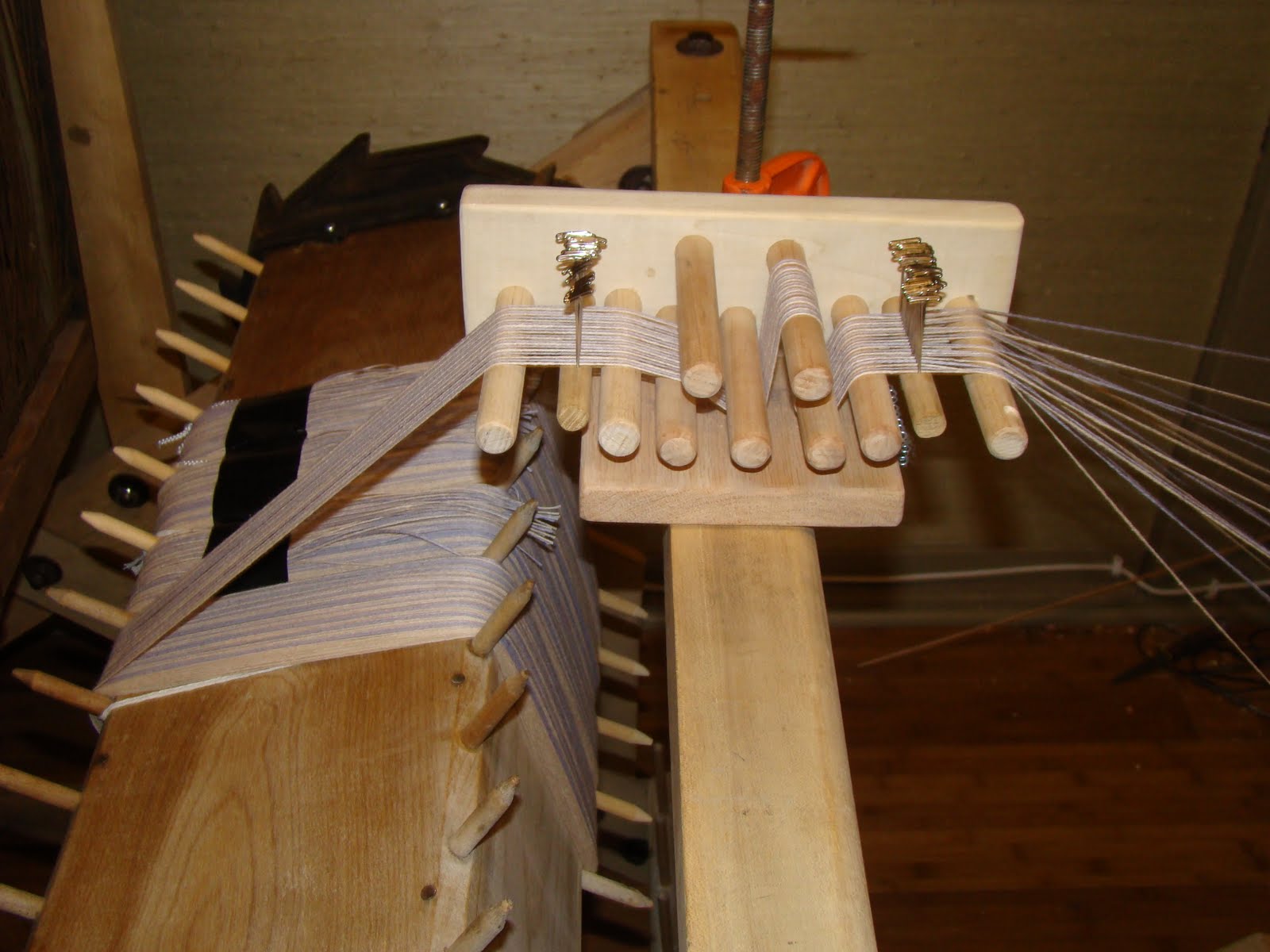 Only my plans would have been considerably smaller, with enough flat surface area to mount a pre-made sectional rake, perhaps on spacers so the warp threads clear the corners of the square beam cover.

Then there is this, where the rakes have been attached directly to a piece of pipe: 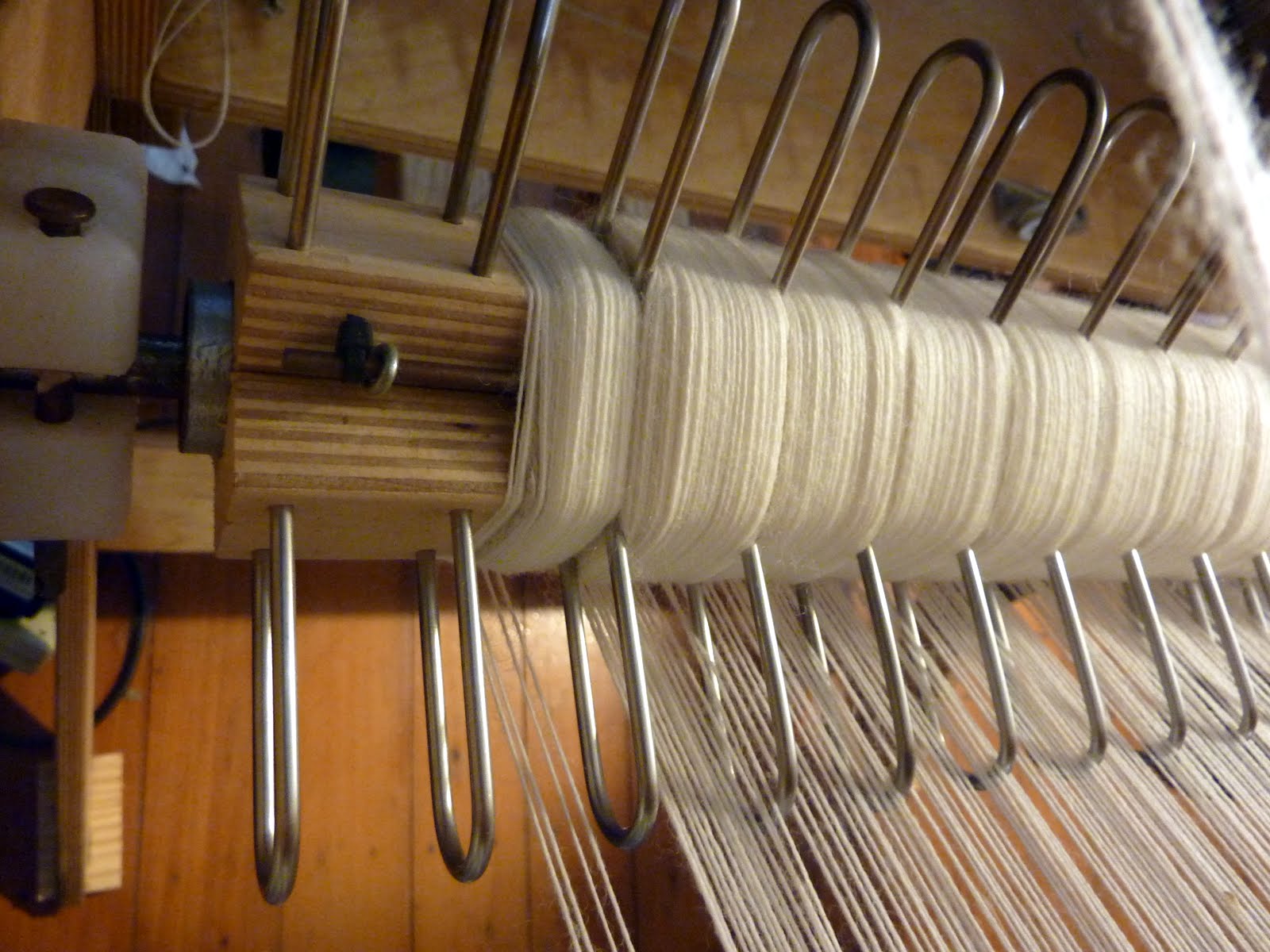 This COULD work for me - IF the pipe that comes with the Julia is sturdy enough, and IF I can get someone to drill additional holes in the pipe for me, and IF the pipe is of sufficient diameter to allow attaching the rakes.  However - aside from all those ifs - I don't have a router anymore and the rakes would need to be routered to fit around the pipe.  However however - routered spacers could solve most of those issues, if I can find someone with a router to router them for me.  That's a lot of router-ing, but its less router-ing than trying to shape the entire length of 4 sectional rakes.

Finally, I found this: 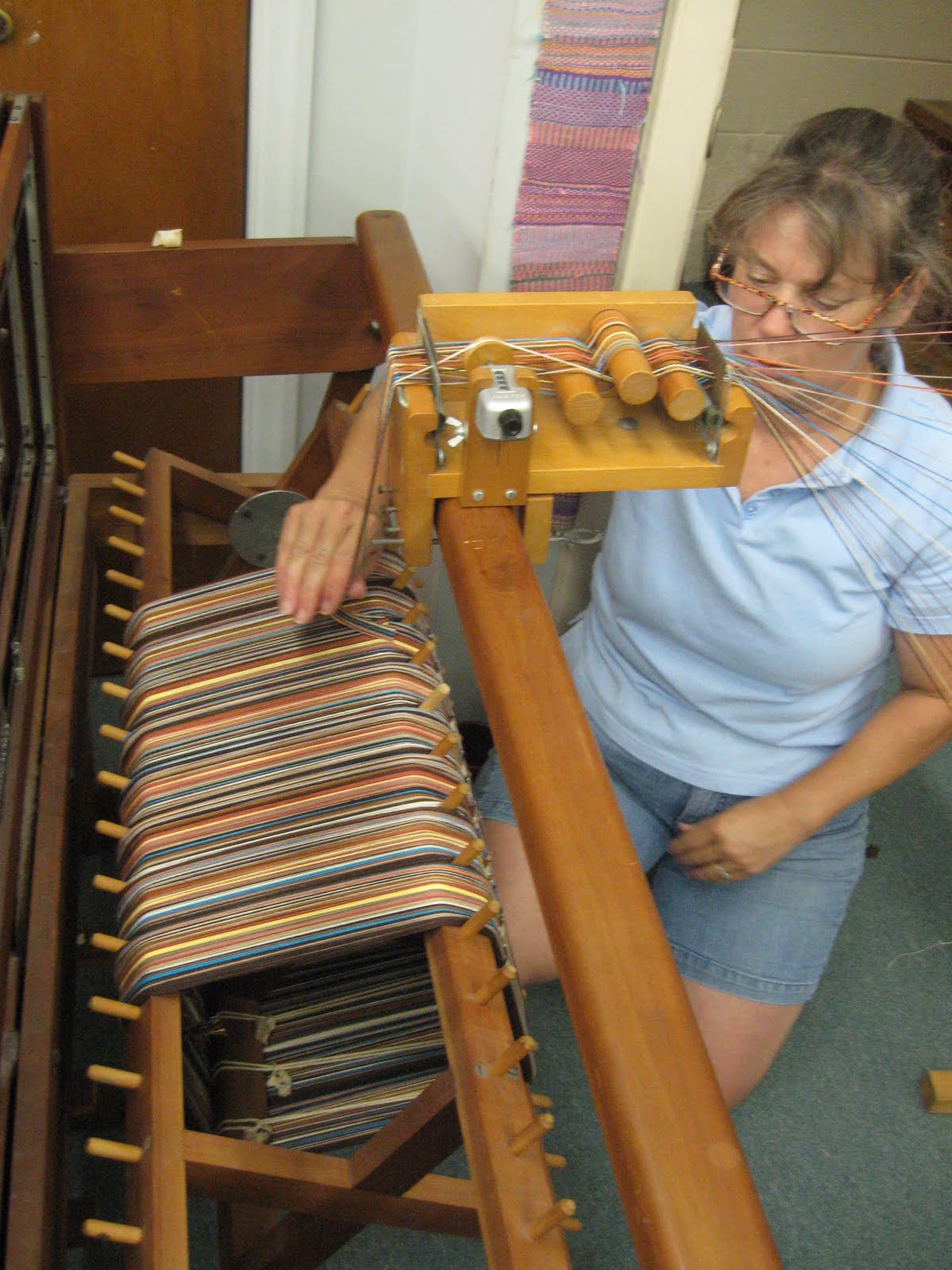 This would be very easy for me to make as it is all straight cuts, and I would use pre-made sectional rakes instead of the ones in the picture that appear to be handmade.  The best way to do those cross pieces is with a lap joint, which I don't have the tools or dexterity to do well any more - but given how short my warp beam is, I don't think that's really necessary for other than the sake of prettiness.

I could cut one long piece and 2 short pieces and fit them together, then strengthen the joint with a piece of plywood screwed to the crosspiece to stabilize it.  That leaves figuring out how to attach the new beam to the existing ratchets and what not because the standard warp beam has now been removed from the equation altogether - this would actually be making a new beam as opposed to making a beam cover.  I'm not sure that's such a great idea given my current level of functionality and how it affects my capabilities - but I'll see what the attachment system for the standard pipe beam looks like when I get the loom.